Charlottes Trip to the Maldives

The Maldives has always been my dream destination and seeing as this year was a ‘big’ birthday I thought what better excuse to visit!

After flying from Heathrow with a short stop in Abu Dhabi we arrived in Male in the afternoon, coming out into arrivals we went straight outside the terminal to the speed boats! What a way to do a transfer! Pulling up to our island was like pulling up to paradise, it was exactly as I had imagined, white sand, turquoise sea and clear blue sky just like in the brochure.

I stayed at the Club Med Kani Resort on All Inclusive for 8 nights. All food, drink and activities were included (even though relaxing was the only activity I had planned!) The food was fantastic, the buffet always having a selection of around the world cuisines and different theme nights, my favourite being the white beach party, everyone wore white and the buffet was moved outside to the beach, the atmosphere was magical and again amazing food!

We stayed in a Beach Bungalow which was steps away from the sea, this was the lead in room category and couldn’t be faulted although I was lucky enough to go and have a look at a Water Bungalow which would be a real treat for a honeymoon or a special celebration having steps from the bedroom directly into the sea and access to an exclusive 5 star lounge.

There were plenty of excursions available most involving the water! I went on the 3 hour Turtle Safari which gave you an hour in the water searching for turtles, I saw 6 so was defiantly worth the trip and something I would recommend to all ages, life jackets and snorkels were all provided.

As my trip was coming to an end we decided to go for a morning walk around the island, being only half a mile long and 200 meters wide this was a nice casual stroll and to my surprise by the end of this walk I had become a fiance and got engaged! It was the perfect end to a magical trip and I hope to return one day maybe for my honeymoon! 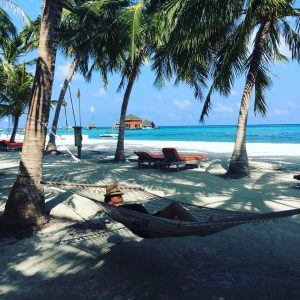 Just a quick line to say what a great job Lisa and her Team do. We have booked 2 holidays which have been both an easy and enjoyable booking process. …Read More